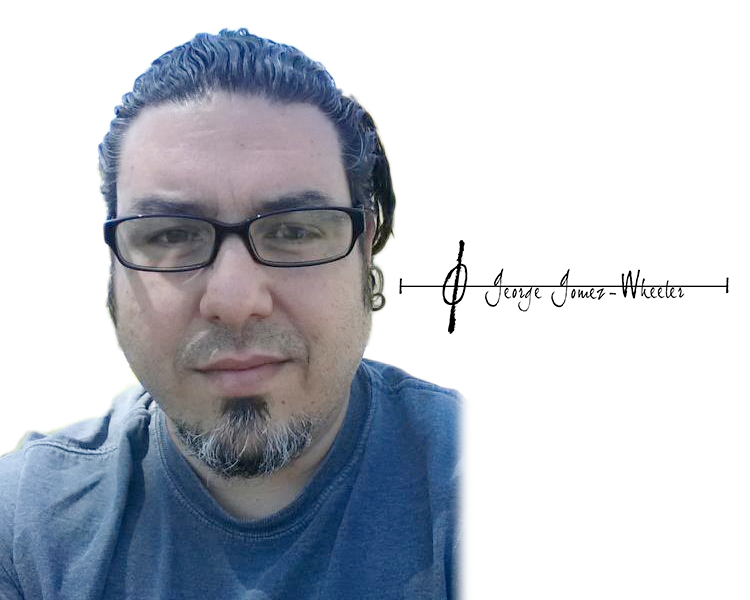 George Gomez-Wheeler is a composer and performer of acoustic and electronic music. His work combines diverse instruments and genres, musical interactivity between performer and computer, concepts of spatialization, and video processing. His current research interests continue to focus on a theoretical approach to electroacoustic music composition as well as the creation and mapping of new electronic musical instruments that attempt to capture human expression.

He performed for fifteen years as a saxophonist and Technical Director of the Liquid Skin Ensemble, a seven-member group comprised of classical, jazz and rock musicians, which performed at major venues in Los Angeles, such as the Japan America Theater, the Getty Museum, as well as at the LG Arts Complex in Seoul, Korea.

He is a co-founding member of Frère Concrète, a new music electroacoustic duo that consists of flute, saxophones and EWI, dueling laptops, and visuals, which has performed at different university venues in Los Angeles including The Daniel Recital Hall at CSULB, The Wild Beast and the R.O.D. Theatre at the California Institute of the Arts (CalArts).

George has collaborated with choreographers for many years. Recently, he premiered “Arise,” a commission for percussion quartet, at REDCAT (May 2015), and “(R)evolve,” a collaboration with Choreographer Leslie Scott at the Sharon Disney Lund Theatre, CalArts. He also was involved in the event “Speed Dating and Hookups” at Art Share L.A. (May 2014), which included a structured improvisation with Damon Rago and a free improvisation with Loretta Livingston.

His Multimedia Video/Dance collaboration with Choreographer Lauren Winslow-Kearns, and Filmmaker Mark Vanocur, with the piece, “Everywhere I Look,” is part of the New York Library permanent collection. Additionally, he has composed original music and sound design for the Body Talk Dance Company

As a professional sound engineer, he worked with many local groups spanning from Rock, Punk, Ska, and Latin Jazz to Postmodern/Contemporary Classical.

Dr. George Gomez-Wheeler recently created the Music and Integrated Technology program at Rio Hondo College. Prior to that, he served for over fifteen years on the Composition/Theory faculty at the Bob Cole Conservatory of Music at CSULB, as well as Cypress College, Orange County High School of the Arts (OCHSA), and the Sharon Disney Lund Dance Department at CalArts. He received his Ph.D. from UCI in Integrated Composition, Improvisation, and Technology (ICIT).