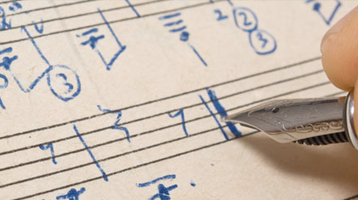 Cantus- pour quatre musiciens (2014) 22’
Bjork and Arvo Pärt are virtual guest artists in this piece. The source material comes from a very interesting and quirky
interview that aired in 1997 as part of BBC’s Modern Minimalists. The shape of the piece has two parallel processes; one is
deconstructing while another is being reconstructed. This is similar to how the interviewer and interviewee do not seem to connect.
Tintinnabulation is also deconstructed and explored.
Premiered February 11th, 2014, The Wild Beast, CalArts

…hear the sound of sounds (2013) 11’
“Bathe in the center of sound, as in the continuous sound of a waterfall. Or, by putting fingers in ears, hear the sound of
sounds. Intone a sound audibly, then less and less audibly as feeling deepens into this silent harmony.” quoted from Zen Flesh, Zen
Bones by Paul Reps
This piece allows for the structured improvisation over a drone. EWI and bass flute are played and recorded into buffers for
further audio manipulation.
Premiered May 3, 2013, Daniel Recital Hall, CSULB